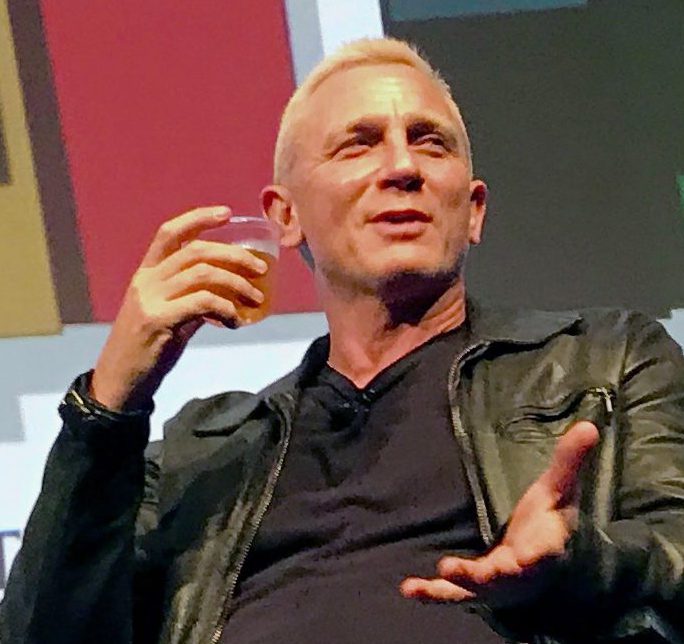 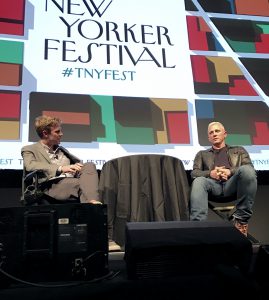 Ok, not exactly. I met Daniel Craig, the actor who played James Bond in Casino Royale, Quantum of Solace, Skyfall, and Spectre.

Let me explain exactly how this marvelous occurrence took place.

Every year in NYC, there is a festival called the New Yorker Festival. This event occurs once a year, usually in early fall. The event is a gathering of important figures in the arts, politics, etc. Many well-known figures are interviewed, and you can purchase tickets to see one interview or more. Since my dad is a huge Bond fan, and that has rubbed off on me, we went to NY for the weekend to see the city + Daniel Craig being interviewed.

The event was called Beyond Bond.

It was Friday night, and the event began at 10 PM and ran until 11:30. My dad, his friend, and I waited outside at around 9:30, and were admitted into the theater where the event was taking place at 10. We had front row seats, only a few feet away from the stage and table where Mr. Craig and Nicholas Schmidle (the interviewer) would sit. There was a large movie theater-style projected screen behind their table. The New Yorker ran some ads for their sponsors, and Mr. Craig + Mr. Schmidle walked onto the stage and took their seats.

I was in the center of the middle of the front row.

The two discussed Mr. Craig’s childhood, inspiration to become an actor, and ran a few clips from some of his movies. They eventually got to politics (Mr. Craig is a Clinton supporter). At last, after bouncing around a few topics (favorite actors, Craig’s role in Star Wars: The Force Awakens, etc.), they reached what was likely the most anticipated topic of the evening—Mr. Craig’s experience as Bond. Long story short, he enjoyed being Bond, and denied the rumor that he was offered $150 million for another film. Of course, Mr. Craig did not say outright whether or not he would take the role again.

Towards the end, the floor opened up for a Q&A session. People lined up at microphones stationed in the aisles, and asked their questions. I don’t really remember any of the questions, but I wanted to ask one, so halfway through I stood up and went in line. As far as I’m aware, I was the only kid at the event. There were likely a handful of other highschoolers, but I’m not sure.

Anyways, time was running out, so Mr. Schmidle decided to write down the questions asked, and have Mr. Craig answer them four at a time. Eventually, it was my turn to ask a question. I could barely reach the microphone. I had to stand on my toes, and even then I barely reached it. I was a bit wary of asking questions, but I was like “What the heck” and went for it.

I asked what was his favorite movie (out of the ones he’s been in). And then I asked Mr. Craig for his autograph. He said “Yeah”. I had brought my autograph book, so I raced down to the stage and handed it to him.

Oh the awesomeness (yes I know that is not a word) of that moment…it was unreal. So he signed it. and reached out his hand to shake mine. I kinda missed it (oops) so he just patted me on the back.

Then, I sat down, a few other people asked their questions. I kinda ignored the questions because I was lost in the euphoria of the moment.

So, the questions were repeated and answered. Eventually Mr. Craig got to mine, and seemed a tad bit overwhelmed (it was a rather difficult question to answer). So, he gestured towards me and said “Which is your favorite?” I replied “Skyfall,” and he said “Okay, Skyfall.”

Those were probably some of the best few minutes of my life.

Below are photos and a video of the event (for my recurring readers, besides the ones who know me in the real world, this will be the first time you’re seeing me!).

5 thoughts on “His Name is Bond, James Bond”